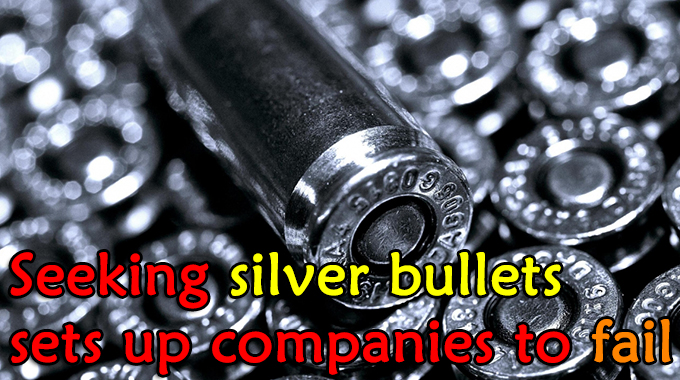 When penicillin was invented in 1928, it was heralded as a miracle drug: a silver bullet. All of a sudden, all sorts of once incurable diseases had one easy cure. It saved lives, it changed modern medicine, but unfortunately, it has totally messed with our expectations about how we solve problems.

We love the idea of one super powerful and world-changing solution, especially in the startup community. We constantly look for the business tool version of penicillin: a miracle app that promises to save your company, or a lifehack that will make you 3 times more productive at work.

The silver bullet is incredibly tempting, especially when you’re dealing with a really complex problem like starting a company.

How many articles do you read that promise to introduce you to the last app you’ll ever need, or the only tool you need for your startup to succeed? These promises are enchanting—we’re likely to click on the articles, or spend a lot of money on the apps. And they almost never work.

That’s because if it sounds too good to be true, it probably is. That doesn’t mean companies shouldn’t look to new tools to help them succeed. It just means that, as with penicillin, they need to put additional systems in place to ensure success.

Turns out, one of the most effective of those systems has been around for centuries: the checklist.

Even penicillin, it turns out, is not really a silver bullet. The drug once heralded as the end of all illness just isn’t as strong as it used to be. Slowly but surely, microbes are becoming resistant to the antibiotics pharmaceutical companies put out on the market, no matter how potent they are.

The real problem with our reliance on antibiotics is that because we wereso sure that penicillin was a true silver bullet, medicine blinded itself to alternatives.

The same happens with other kinds of silver bullets, not only in the startup community, but also in the economy at large. In 2006, a lot of people might have called mortgage backed securities a silver bullet—an easy way for banks to make money without risk, and for Americans to buy homes.

This kind of willful blindness—the certainty on everyone’s part that everything was going along just fine and there was no need for closer examination—was one of the major factors leading to the housing crisis.

Depending on a silver bullet is the equivalent of putting all your eggs in one basket, crossing your fingers, and hoping for the best. It’s just a bad business practice. As in the case of “miracle drugs” like penicillin, silver bullets are a dangerous oversimplification of a complicated problem.

They lead to errors of extreme magnitude, because if we’re all turning a blind eye, trusting our silver bullet, we don’t catch mistakes until it’s too late. If you’re doing this as an entrepreneur, it could sink your startup.

The fallibility of “silver bullet” surgeons.

Surgeon Atul Gawande witnessed this problem in his hospital. Even in an operating room—one of the most complex, variable, and high-risk situations you can imagine yourself in—hospital staff were depending too much on a silver bullet: a surgeon’s experience. Relying on that experience led to lots of serious errors that were totally avoidable.

Yes, surgeons get better with experience. If a surgeon has been performing thyroidectomies for 15 years, she’s more likely to spot potential complications and know how to address a problem when something goes wrong.

However, a surgeon’s experience does not mean that everyone else in the room can relax and turn a blind eye. As Gawande noticed, surgeons, nurses, and attending physicians regularly deviated from procedure—including simple steps like washing their hands—in part because they trusted a “silver bullet.”

Because they had too much trust in one incredibly powerful tool—like a surgeon, or a even a robotic laparoscopic surgeon—they thought their bases were covered. And that’s when they slipped up—when there was nothing keeping them in check.

As one medical student told an NIH study, he stood by silently while witnessing a surgery where a surgeon committed a big no-no: he touched the tip of his scalpel to his plastic face mask. As the student describes, the surgeon “froze for a few seconds while everyone else in the operating room stared at him. The surgeon then continued operating,” something everyone in the room knew he shouldn’t have done.

Why didn’t the student say anything? Because he assumed the surgeon knew best. The surgeon was the silver bullet. And why bother keeping a silver bullet in check?

His solution: the checklist.

The logic is stupidly simple. It takes a really complex process—like surgery, and explicitly lays out all the steps. Did the surgeon wash her hands? Did all the team members introduce themselves by name and role? Did someoneconfirm the identity of the patient? (Yep. That one really happens.)

Gawande has since deployed them in hospitals all over the world, and they’ve been shown to reduce patient deaths dramatically. Gawande even started using checklists in his own operations to get a taste of his own medicine. At first, he certainly didn’t think he needed them.

“But in my heart of hearts—if you strapped me down and threatened to take out my appendix without anesthesia unless I told the truth—did I think the checklist would make much of a difference in my cases? No. In my cases? Please.”

But he did. The week he wrote that paragraph, in fact, checklists led him to catch 3 errors out of 5 operations he performed. Ego: checked.

Why checklists always get the job done.

Gawande documents this phenomenon in his bestselling book The Checklist Manifesto. As he proves in the book, checklists aren’t just for hospitals. They’re for all kinds of silver-bullet thinkers. Anyone who assumes that things will get done without checking in is probably in need of a checklist. As he writes:

“It is far from obvious that something as simple as a checklist could be of substantial help. We may admit that errors and oversights occur—even devastating ones. But we believe our jobs are too complicated to reduce to a checklist.”

But they’re not. As he documents in his book, checklists help pilots land planes, they help investors make better decisions, and they prevent buildings from collapsing. They even helped win World War II.

That’s because when we rely too much on a silver bullet—whether it’s an automatic landing system for a plane or an experienced investor’s opinion, we can turn a blind eye to really glaring problems. Did someone double check that the landing system was working? Did someone confirm that the investment was sound? Without checklists, these seemingly obvious questions often slip through the cracks.

Checklists reign in our egos. They are a gentle reminder that things are complicated, and we need to do the work to prevent mistakes from happening.

Of course, simply having a checklist doesn’t always work. As Gawande found, the checklist needs to be turned into a process that people actively look at and check off for it to function well. Otherwise, people try to make a “mental checklist,” which completely defeats the purpose.

Take hand washing in hospitals, for example. There are signs all over hospitals that tell you to do it. But it’s really easy to break because there’s very little oversight or enforcement of the rules.

By applying the lessons from The Checklist Manifesto, Vinay created a tool that makes sure checklists not only get created, but are actually adhered to. Workflow automation tools are shared with other team members, which leads to transparency and oversight. So while it’s easy to skip washing your hands because no one else in the hospital will notice, you can’t skip a step with Process Street.

The real benefit of Checklist Manifesto software and implementation is that it creates the right kind of team-building attitude that’s really necessary for companies to succeed. It makes everyone accountable and responsible for their actions.

And that’s the real difference between silver bullet thinking and checklist thinking: the attitude that they produce in the workplace. Silver bullets create a culture of over-reliance and dependency on something else. They encourage you to put up blinders and assume that everything is going well when really, if you were to take a closer look, you’d realize that it wasn’t.

Checklists, on the other hand, create the right kind of culture. Checklist thinking is actually the antithesis of silver bullet thinking—and it’s definitely a healthier mentality for your startup.

It encourages that you constantly check in with your self, your staff, your processes. In addition, it’s a tool that evolves over time, and is always being shaped to fit what might work better.

As Gawande says, checklists are about more than just adhering to rules: “Just ticking boxes is not the ultimate goal here. Embracing a culture of teamwork and discipline is.”

The real problem isn’t with silver bullets. It’s with the kind of thinking that accompanies them—the kind of willful blindness that we go along with and inevitably leads to your company’s failure. 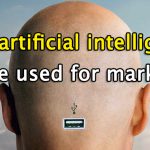 PrevHow artificial intelligence can be used for marketingApril 4, 2016
Attention is a finite resourceApril 5, 2016 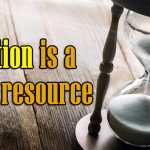